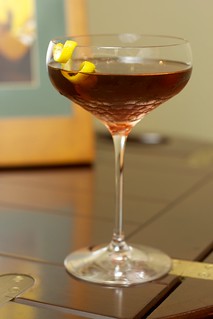 This is a CocktailswithM first—a cocktail of our own creation.  Normally we stay away from this because 1) in more than a century of mixing a limited number of ingredients together, it’s probably already been done, and 2) if it hasn’t been written down  before, it probably sucks.   That being said, an occasion arose for violating this sensibility.    Last spring I ran across articles in both Imbibe Magazine and by David Lebovitz describing how to make an Italian green walnut liqueur called Nocino—Lebovitz calls it liqueur de noix, as he lives in Paris.  As green walnuts are readily available for the gleaning around here in the spring (especially if you know our friend Elsie), I was intrigued.  Green walnuts are completely different from mature walnuts in that they are soft enough that you can easily cut through them with a chef’s knife and you use the entire fruit, including the outer flesh.

It’s a pretty simple process to make nocino.  You start by quartering sixteen or so green walnuts and zesting a lemon into a large jar.  Add a 750 ml of cheap vodka and let sit in a dark place, inverting occasionally to mix.  After six week, make up a rich simple syrup with one cup of sugar and a half a cup of water  that you add a cinnamon stick, a vanilla bean and several cloves to while you boil for a couple of minutes. Strain the alcohol form the walnuts and the simple syrup into a new jar and let sit for another six weeks in a dark place. After that, strain it through a fine mesh strainer and some cheese cloth and you have Nocino. 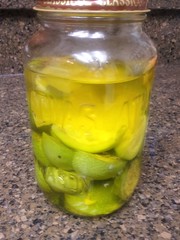 The walnuts undergo a fairly disturbing transformation in the process.  The liquid starts out  clear with fresh green walnuts in it.   In pretty short order it becomes this sickly fluorescent green color and slowly becomes the dark brown with a green tint of very used motor oil. While certainly not the most aesthetically appealing potation, it really great interestingly complex, yet subtle, flavor.  The sweetness and herbal astringency along with the nuttiness 0f the walnuts gives it a warm autumnal feel.  Lebovitz recommends serving it over vanilla ice cream, and I suppose he’d know as he also wrote my favorite ice cream book.

While it’s alright on it’s own in a cordial glass, it left me wondering if you could make a cocktail with it.  Imbibe had a couple of choices, one of which, the Matrimony cocktail, seemed like it might be good and may well be a future post.  The problem was that it’s gin-based and I really think the sweeter “autumnal” flavors of the Nocino would pair well with an American whiskey.    Several places tried making a modified (bastardized) Manhattan using bourbon and substituting the Nocino for the vermouth.  That is clearly going to wind up cloyingly sweet.  I decided I was going to have to concoct one myself and after several nights of testing, we came up with:

Stir ingredients with ice and strain into a cocktail glass or an old-fashioned glass with a fresh large ice cube and garnish with twist of lemon. 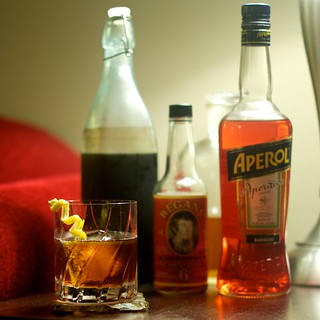 So the first thing that is clear is that this is a riff on the Boulevardier, which itself is a riff on the Negroni.  I figure if you change every ingredient, though, you get to pick a new name.  My thinking was that to balance the sweetness of the nocino, you needed some bitter flavors like you get in an amaro.  We tried both the Campari that is normally in the Boulevardier as well as Aperol.  Aperol’s milder, more citrus flavors really worked better.  Also the edginess of rye made for a much more balanced drink than the bourbon.  Finally the orange bitters added another nice layer to the drink.

As to the name, it is an homage to Davis, California’s Russell Boulevard which is lined with walnut trees.  It’s also a subtle secondary homage to the Russell family of legendary whiskey makers that make the Wild Turkey rye in the drink.

So, should you find yourself in possession of a batch of green walnuts, nocino is a great way to dispose of them and we think this is a pretty good way to enjoy the Nocino.