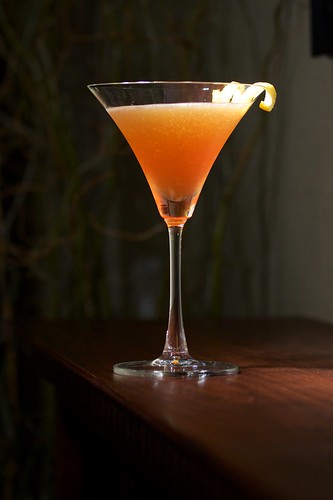 Certain cocktails just seem timely, if perhaps obvious.  The Leap Year Cocktail seems to fit that description.  It’s an odd sort of cocktail for, well, an odd sort of year.  Brenda actually ran across on thumbing through Robert Hess’s The Essential Bartender’s Guide and then found that he made it on his Cocktail Spirit video series.   Among the mixologic oddities of this cocktail is the fact that we actually know its provenance.  It was invented by bartender Harry Craddock on February 29, 1928 for a celebration at the Savoy Hotel in London, according to the 1930 Savoy Cocktail Book.  It also claims “to have been responsible for more proposals than any other cocktail that has ever been mixed.”

This cocktail is an odd combination of ingredients.  The gin and sweet vermouth resemble a Martinez, but then the addition of Grand Marnier takes it in even sweeter citrus direction.  The original recipe calls for only a “dash” of lemon juice.  Having tried this, it leaves the drink on the cloying side, probably reflecting the 1928 cocktail palate. I increased the lemon juice a bit to combat the sweetness, which seemed to work without completely altering the drink. The result is closer to recipe that Troy Patterson included in a rather humorous article for Slate, in which he describes the Leap Year with “You could achieve an equivalent taste experience by sucking a Ricola while sipping cold gin.” The assessment seem a bit harsh; not unfounded, but harsh.

Shake with ice and strain into a cocktail glass.  Garnish with twist of lemon.

While not likely to enter our regular rotation, Both B and I agree that the Leap Year is certainly enjoyable and festive enough for any leap year celebration.  The matrimonial consequences of such a decision, however, are entirely upon you, dear reader.