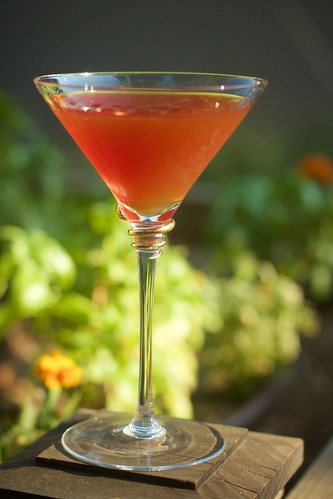 Astute readers will recall the we previously covered another version of the Blackthorn Cocktail, but which was gin based.  In fact probably the original namesake was called the Blackthorn  after the plum-bearing shrub  that produces the sloe berry (from which we get sloe gin).

Philip Greene‘s book The Manhattan … provides this version which he claims (according to the March 18, 1905 edition of the New York Times) to be loosely based on a “Shamrock cocktail”, whose infamy they saw fit to immortalize due to the barman at the Hotel Netherland providing them to the sixty-ninth regiment instead of the requested water and subsequently impeding the St. Patrick’s day parade for a considerable time.

Stir with ice and strain into a a cocktail glass without a garnish.

Opinions on this one vary.  I think it runs a bit sweeter than I would prefer. B thinks there’s way too much absinthe (I like absinthe, so maybe I am biased).  Still, it’s not a bad cocktail if you want to change things up a bit on occasion.